Most Australians think courts are inaccessible and lawyers are costly, complex and slow to resolve problems. These are the key findings of Law…What is it good for? How people see the law, lawyers and courts in Australia, the first research report from the Victoria Law Foundation.

In an Australia-wide survey of over 1,800 people, Australians don’t always think that the law and lawyers are relevant or important when presented with legal problem scenarios.

People tend to think that the law is relevant and that lawyers are important for problems like unsafe working conditions or serious personal injury, but matters like trouble paying credit card debt or underpayment of wages are far less likely to be seen as legal.

People typically regard courts as ‘inaccessible’ – complex, costly, slow and hard to understand. Lawyers are generally seen as more accessible than courts, but less so when it came to cost, complexity or speed.

Differences in demographic characteristics came through strongly in the study, showing the law tends to be seen as less relevant if you -

On the other hand, some groups saw the law as more relevant and lawyers more important, including -

Mental illness was also a clear indicator. People in this group are more likely than others to view courts and lawyers as significantly less accessible, though they also see the law and lawyers as more relevant, even for less serious legal problems.

‘If people don’t see their problems as legal, they may not get the help they need. Understanding where people are in their levels of understanding offers valuable insights which can be used to improve public legal education. And it helps services deliver assistance that starts and ends with the needs and capabilities of users,’ said the Foundation’s Research Director Professor Nigel Balmer.

‘These findings on accessibility of courts and lawyers show that there will be significant benefit for the justice system and the legal profession in increasing transparency and understanding, and addressing negative perceptions of fairness and accessibility,’ Professor Balmer said. 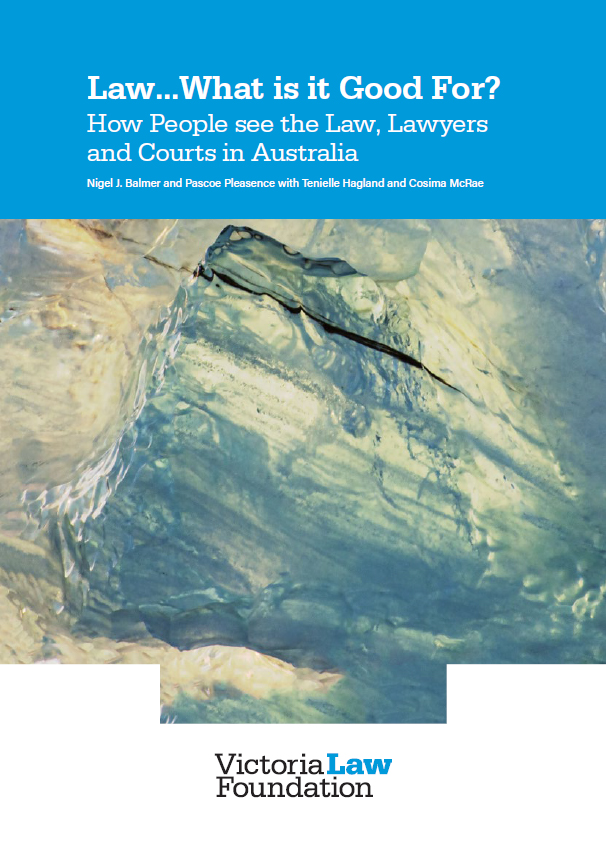 Find out more about our new report Law...What is it Good For?

About the Adult Parole Board